> Könyv>Rock>LP Ricky Warwick: When Life Was Hard And Fast (Gatefold)

LP Ricky Warwick: When Life Was Hard And Fast (Gatefold) 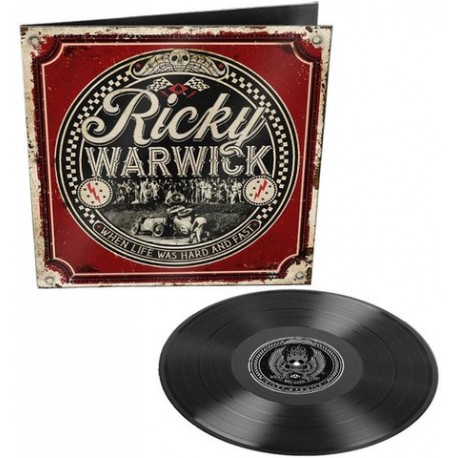 “The true spirt of rock n’ roll is a relentless pursuit that consumes me on a daily basis. Chasing after it, making this record was a race well run” - Ricky Warwick.

Following 2016’s lauded ‘When Patsy Cline Was Crazy... And Guy Mitchell Sang The Blues’, Warwick is getting ready to unleash his 5th solo album in 2021. Titled ‘When Life Was Hard And Fast‘, it was recorded in Los Angeles and produced by Keith Nelson (ex-Buckcherry), who also co-wrote the majority of the songs on the record with Warwick. Also, once again, Warwick tapped some of his closest friends for guest appearances on the record, including Andy Taylor (Duran Duran & Power Station) Luke Morley (Thunder), Joe Elliott (Def Leppard), Dizzy Reed (Guns n Roses). Ricky also duets with his daughter Pepper on the song ‘Time Don’t Seem To Matter‘.

For those intrigued by the album cover, it depicts a crash scene from the famous Ards TT Motor Car Race in County Down Northern Ireland. The race ran from 1928 until 1936 was watched by over 250,000 spectators annually. The embankment in the photograph that the spectators are on is actually a field belonging to Ricky’s Great Grandfather’s Farm, which he grew up on for the first fourteen years of his life.